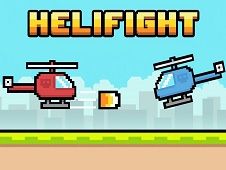 Helifight is one of the most popular war helicopter games that you can pilot in a real fight. To be able to play this game you will have to look for a friend because the action takes place in 2 players, which is why you cannot fight against the computer. Another important thing is to try to build your strategy as best as you can to destroy your flying opponent. To shoot at the opponent you will first have to look for ammunition for your helicopter, on the opposite side of the game you will have an icon that gives you bullets for the helicopter's machine gun, but in order to reach it, you will have to pass over your opponent who is stationary. in front of you.

If you do not make an air accident, you have the opportunity to get to the ammunition and you can start firing at your opponents. Be careful because the game has no edges, so if you get to the left side of the game you will be transferred to the right side and so on, it is like a full action mirror. The one who manages to shoot first and to shoot the opponent's combat helicopter manages to win a mission. The colors of the helicopters are red and blue and each helicopter starts from a diametrically opposite position.