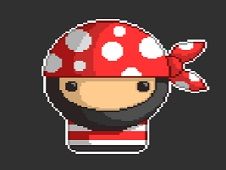 You and your pirate crew are on an adventure when a mutiny breaks out! You must defend yourself against the other pirate team in 15 unique levels. The game can be played in 1 player and 2 players. In the 1 player mode, you play against the computer and you are on the red team playing against 14 unique characters. In the 2 player mode you play against another player, one player is on the red team while the other is on the blue one.

In the 1 player mode, the map is chosen by the level. The 2 teams spawn on the map in different arrangements. In the first level, you start on a small island and the 2 teams are on opposite sides. Each team has 1 captain and differing amounts of crew members. Once you choose a pirate to take action with, you will be shown how many weapons he's got and to give up the round and to throw the character. The captain has the most and most varied amount of weapons.

There are many types of weapons in Mutiny. The most basic weapon is the bomb, it creates a small explosion that gives small amounts of damage, it also throws the character(s) it blew up close to. The second most common weapon is the TNT, it is a much bigger explosion than the regular bomb and it throws characters much further too. The boulder is a huge rock that is throwable and deals huge amounts of damage to the enemy and player. You also have rum bottles, these explode on impact and leave a fire trail that damage all enemies on a given surface.

There are also weapons that block the enemy, these include the crate, you can place 3 of them before your turn is over. The explosive barrel is the same as the crate except if it comes in contact with fire or an explosion it will explode too, you can only place 2 of these before the round is over. The anchor can be dropped on any enemy that is outside the open, dealing around half of the total HP of a pirate. The tidal wave creates a huge wave of water that deals extreme amounts of damage to the enemies that are placed closer to the water in the level.

If an enemy or one of the player's pirates fall into the water, they die instantly. Some levels feature ships while some only feature land.

Are you ready to dismantle the mutiny? Say Yarr if you think so!