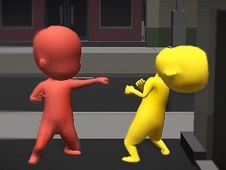 What is Stickman Fights?

Stickman Fights is a fighting game where you fight as Stickmen! First, the game searches for an opponent for you to fight. After an opponent is found, you will start the fight. You can kick, and punch the opponent. Kicking and punching the opponent will drain some of his health. Once the opponent's health is down, you win the round. To win the whole match, you must defeat him at least twice, if you don't the game will keep going until someone defeats the opponent twice.

You can also place bids on the game, bidding 0 money will award you 250 money if you win. You can place higher bids too, winning will award you double the amount of the bid. You can bid 0, 500, 2000, and 5000 in-game money. This money can be used to buy skins, you can buy yellow, red, green, blue skins and other more colorful and complex skins like emerald, ruby, diamond, tesla, and even a matrix skin! While the basic colors cost 250 money, the other more complex skins cost exponentially higher, up to 50000 in-game currency.

You can also jump, combining kicking, punching, and jumping is a great strategy for defeating your opponent. Each opponent is different, some are stronger while others are weaker. The fights also happen on the street, near a road.

Use WASD to move. Left-click to kick, right-click to punch.