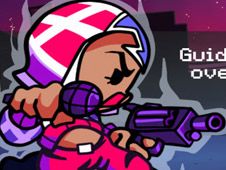 What is Friday Night Funkin JJBA?

Considering how both Friday Night Funkin' Games online and Jojo's Bizzare Adventure both have a cult following all over the internet, it was not at all surprising that right now we can offer you a mod where Boyfriend can go against the various Jojo characters that so many of you love, something that we invite you to try out right now and here with the game called Friday Night Funkin JJBA!

Of course, not only does Girlfriend now has a look like an anime character from JJBA, but so do the antagonists that Boyfriend has to defeat in musical battles, and you will do it on the custom songs you've grown to love so much already, such as Fresh, Monster, Blammed, High, Cocoa, or Thorns, with there being three custom songs per week.

Character designs from the show you will see integrated in this mod include Trisha Una, Narancia, Diavolo, Doppio, and Guido Mista.

To win the music battles, show that you have rhythm by pressing the arrow keys at the correct times, precisely when the arrow symbols that are floating on the screen match with those on the top, but don't have too many misses in a row, because if that happens you lose and have to start all over again from scratch.

Good luck with this awesome new FNF Jojo mod online, and stay tuned to our website, so you don't miss out on any other new mods that might be coming for you very soon!