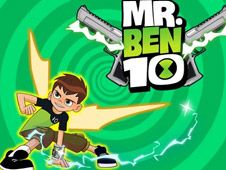 If you've liked playing Mr. Bullet Games online in the past, which are some of the most popular puzzle games with shooting on the internet, there is no way you are not going to love that this format has now been adopted into the Ben 10 Games series, where, in this game, instead of using his aliens, Ben will use a gun to take out his target and his enemies.

In each level of the game, you have one or more targets that you need to shoot, so you will use the mouse to point in the direction you want to shoot and then release the mouse button to make the shot. Not only does the number of targets grow as you keep on playing, but the targets are also going to sit at angles that are trickier to reach, so you have to figure out the best way to shoot them down.

Remember that you only have three bullets per level to use, and if you waste your three shots without taking out all your targets, you lose the level and have to start it all over again from scratch.

Good luck to everyone, and we hope you stick around and catch all of the other awesome new games with Ben 10 still to come!