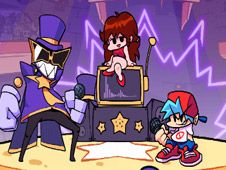 What is FNF vs Violastro?

The newest mod from our category of FNF Games online has just been brought over for you all right at this moment, a game called FNF vs Violastro, where Boyfriend and Girlfriend are facing off with a magician-like character from Australia who brought them in front of cameras on television, so now the only escape for the couple is if Boyfriend defeats him in a musical battle, something that you will do on two custom songs:

When you see that arrow symbols that float around Boyfriend match with those above his head, that is the moment when you have to press the same arrow key on your keyboard, because that is how you play and sing the notes of the songs according to their charts.

You've won the musical battle if you reach the end of the songs and the progress bar is in your favor. You lose if you miss pressing too many of the keys one after another, so be careful not to allow that to happen. Good luck!