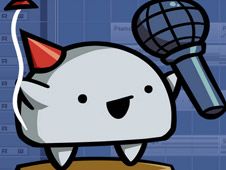 What is FNF vs Sauce (The Shady Cicada Mod)?

As you can clearly see, we are far from being done with our beloved category of Friday Night Funkin' Games today, which is the reason why right at this moment you are all invited to check out its latest contribution: FNF vs Sauce (The Shady Cicada Mod)!

Meet Sauce, a cicada, and defeat it in a musical battle of rhythm!

Shady Cicada is a YouTuber who many people love and who has a mascot called Balloon Boy, who is a balloon boy who holds a balloon in one hand and a microphone in another hand, with you facing off against it on the custom song called Sauce.

Use arrow keys to play the notes of the songs. This means that when arrow symbols above BF match one another, you have to press the same arrow keys on your keyboard.

Don't press the keys too early or too late, since that means losing the game after missing too many notes one after another, so be careful. Good luck, enjoy, and stick around for more fun to come!