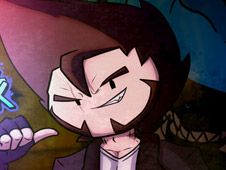 What is Friday Night Funkin vs Kazual?

Kazual is a man who can transform into a super-powered monster, but his main ability is always going to be that of rhythm and music, which is why he did not miss a beat to challenge Boyfriend to a rap battle, so we hope that right now and here you are ready to play Friday Night Funkin vs Kazual and help our main protagonist win, something that you can do on three original custom songs:

Boyfriend Vs Kazual, the battle of the day!

After picking between the story mode or a song from the free play mode, give it your best to reach the end of the song to turn the progress bar towards you by playing all the notes of the song accordingly.

That is done using the arrow keys, so when you see arrow symbols above BF matched with one another, you have to also press the very same arrow keys to hit the tune.

Keep doing that until the end of the song, but don't miss too many notes in a row, because if that happens, you lose and have to start all over again from scratch. Enjoy!