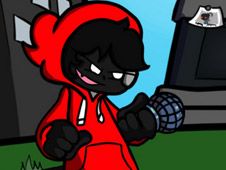 What is FnF vs Jota?

Jota is a dark-skinned dude with a red hoodie who you and Boyfriend will battle next in our series of Friday Night Funkin Games online, where right now we are excited to share with you the amazing new game called FnF vs Jota, which also brings along not one, two, or even three, but four original custom songs:

Boyfriend Vs Jota, the hottest rap battle of the city!

When you see that arrow symbols above Boyfriend's head are matching with one another, it is at that moment you need to press the same arrow keys, and you need to keep doing it until the song is complete to win, when you will see the progress bar fully tilted towards you.

Be careful not to miss pressing the keys too many times in a row, or you lose. Choose between the Story Mode and Free Play Mode, pick a level of difficulty, and then start giving this game your very best. Enjoy!