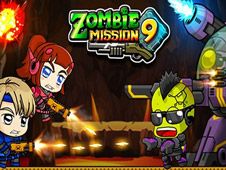 What is Zombie Mission 9?

The Zombie Mission Games series keeps on bringing the fun still, as you can see right now, when we have reached the ninth chapter in this amazing story of fun, where right now you are going to co-op with a second player to visit an underground city, which you might have thought was not reachable by zombies, but they got there too, so only you can defeat them!

Explore the underground city and kill all of its zombies!

As we said, this is a 2-player co-op action-adventure game, where one player controls a boy, and another player controls the girl, both of whom are soldiers who have to defeat the zombies in their path, something you do from one level to another, with each level being progressively harder than the one before it.

In addition to zombies, be careful about traps, obstacles, holes, or lava balls, but if you can collect coins and get upgrades, make sure to do it since they will be useful in your mission. As for the controls, they are simple, and they are as follows:

Defeat all the three bosses at the end of the game, lead the survival mission all the way through the end, and have fun like only on our website is possible!