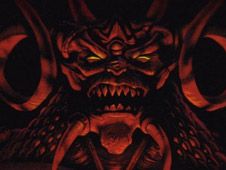 We would now like to welcome you all over to the Old Games category, which should not be underestimated at all because this is not just for older people who want to play the games of their childhood, but we think it's great for young kids to see some retro games in action, just like they are able to do right now with the action-adventure RPG game known as DIABLO!

Become the hero who saves the world from Diablo!

Diablo is the name of the one known as Lord of Terror, which threatens the world known as the Kingdom of Khanduras, with you being a lone hero venturing in the human realm. Underneath the city known as Tristram there are sixteen dungeons through which you have to travel, facing one danger and demon after another, until you reach Hell, and defeat Diablo, the devil!

For starters, after selecting the single-player mode, pick the class of hero you want to be:

Of course, each class has its own specific powers and stats, but all three of them can be improved through the battles you take part in, as well as potions, weapons, armor, and other things you can buy.

With the mouse, you navigate the world, attack, collect items, interact with your inventory, and do anything else you want to do. Start the adventure into hell right now, and see the magic of retro gaming online!