FNF vs Eyes of the Universe 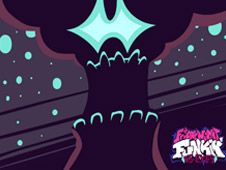 What is FNF vs Eyes of the Universe?

A giant supernatural tree is known as the Eyes of the Universe, and this incredibly powerful being now acts as Boyfriend's latest musical rival, as you will now help our protagonist defeat it on the following custom songs:

Defeat the Tree using only your musical skills!

Whether you are playing in the story mode or free play mode, the way you win is the same, and it is by reaching the end of the songs, which happens if you play all their notes according to the charts.

To do this, watch for when arrow symbols float and match above BF's head, and press the identical arrows from the keyboard, something you have to keep doing until the song concludes.

Don't miss pressing the keys too many times in a row, or you end up losing. We wish you good luck, all the best, and invite you to stick around for more fun to be had!