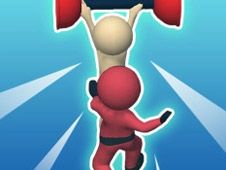 Wow, it seems that video game developers have taken inspiration from Squid Game on Netflix and created their own squid games based around it, new challenges that they would imagine would work really well in the show, and be really fun to play on computers or mobile phones, which is why at this moment we share with you the game called Squidly Escape Fall Guy 3D!

Help the Squidly Guy escape the fall and survive!

The player avatar that you control is that of a stickman who holds a bar that extends and grabs onto the sides of a tunnel because it has suction power. Tap and hold to extend it on both sides.

Do it in such a way that you slowly fall to the ground, without falling really fast, because you will end up losing. Stop to grab the stars along the way, but don't stop where there are other items.

Why? The bumps on the walls represent bombs that will explode upon touch, so be careful not to hit them, or they explode, you lose, and are forced to start again from scratch. Good luck, enjoy!