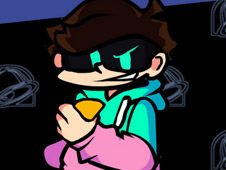 What is FNF vs Nate (Taco Bell Tuesday)?

While at Taco Bell, BF and GF met Nate, a boy who immediately provoked our protagonist to a rhythm battle, something we invite you all to win right now, in this awesome full week mod featuring the following songs:

After making your choice between the story mode and free play mode, give it your best to reach the end of them by playing all their notes according to the charts, something that you do by pressing arrow keys at the same moment as the identical arrow symbols match above BF's head.

Be very careful not to miss pressing the keys multiple times in a row, since that leads to you losing and having to start again from scratch. Good luck, and all the best we wish you all!

FNF vs Impostor Among Us Restyled
ADVERTISMENT