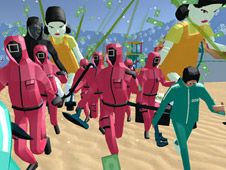 What is Squid Shooter?

Shooting and Squid Game work very well together when they are elements of shooting games 3d online, since the red guards in the show have eliminated many players from the game using guns, but this time everyone else is also against you, in a battle for survival where only you and your guns can keep you alive!

Survive by being the best Squid Shooter!

For starters, learn how you control your first-person avatar. Move with WASD, shift to run, space to jump, the mouse to aim and shoot, mouse wheel to change weapons, and R to reload your ammo. F, Q for knife attacks, G for grenades.

In each level, you have a number of guards, players, dolls, and other enemies to defeat, so shoot them up and don't let them attack you too much, since your health bar getting depleted means losing the game.

You will find yourself on the playground seen for the Honeycomb game, where you should be careful not to get trapped and attacked too much, but be on the lookout for weapons and power-ups you can grab along the way.

Of course, shooting enemies and eliminating them earns you money in return, which you should use in the shop to buy new weapons and cool stuff. We wish you all good luck and tons of fun, inviting you to stick around for more fun to have as only here is possible!