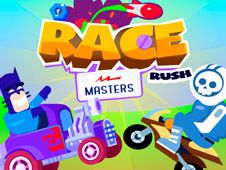 What is Race Masters Rush?

Play Race Masters Rush online for free right now, only on our website, if you are a fan of action-packed racing games with shooting, wacky characters, and interesting cartoonish animation, since this game offers you all of that and much more, resulting in a really great time to be had, something we know from our own time with the game, the main reason for sharing it with you right now!

Rush toward the title of race masters!

From the main menu, know that you can buy new weapons, as well as upgrade your character's aim, speed, give him extra speed, as well as acquire other upgrades such as shields, magnets, fast cars, the killer, bullet speed, and silver bullets. Now, first, to buy these awesome things, you need to win some races, since that is how you win those coins.

Race using the right and left arrow keys, jump with the spacebar. Move and jump in order to avoid getting shot or hit by other racers or flying robots, but also be careful of spikes and other kinds of obstacles/traps you will encounter on the course since hitting them too many times will cause you to lose.

Defeat all the enemies, don't lose your health bar, and get lots of coins by the end of each rush, so that you can upgrade and become better and faster for the next one! Start now, you're not going to regret it!