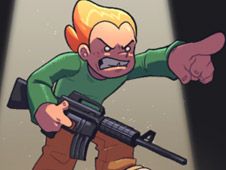 What is Pico Vs Bear DX?

Pico Vs Bear DX is a remake of the classic 1999 game featuring this orange-haired assassin that has gotten a new life on the internet thanks to FNF, but this has nothing to do with rhythm or music since this is an action-adventure game where Pico has to defeat Big Brown Barry, the bear antagonist, and those who work for him.

Pico Vs Bear DX, the remake you have to play right now!

Let's start by teaching you how to control your character: move with A, D, W to switch weapons, mouse to shoot. Other than that, use the mouse to interact with the world around you, since this game has a point-and-click system as well.

Help Pico on his adventure to get inside the house of the Bear first, and then help him use his weapons or other useful items you might find to fight him off and any other antagonists that appear.

Missing out on this game should be out of the question, so we hope to see you let the fun begin right now, you won't regret it!

Use the WAD keys, mouse.