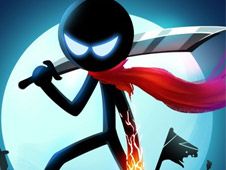 What is Stickman Epic Battle?

Stickman Epic Battle is here to raise the stakes when it comes to stickman fighting games online, which are usually filled with bloody action, with this game having also puzzle and skills elements into it, all of which we will tell you more about right now since we want you victorious!

Win the epic battle of the stickman world!

You can use spears, but also various other weapons. From the menu you can buy armor, weapons, support, items, and various power-ups, but only after you win levels and get coins in return. Upgrading your stickman soldier will help plenty.

There is also a nightmare mode, which increases the difficulty of the battles quite a lot, but the rewards are also bigger. It's quite that simple, so we hope to see you hop into action right away, and become a king among stickmen!