Draw a Line to The Castle 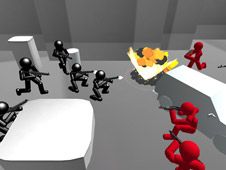 What is Counter Stickman Battle Simulator?

Counter Stickman Battle Simulator is a strategy and war game featuring stickmen that shoot weapons and throw grenades, a combo we've not really seen that much in this genre before, so we obviously wanted to share this new kind of game with you right now, since we always want you to have awesome experiences on our website!

With the mouse you will click where you want your black stickmen to be placed on the battlefield, choosing the class of warrior from the top of the screen, and by doing so, one after another, you try placing them in the spots that are more advantageous against the waves of enemies.

When you're ready, click the play button, and your black stickmen and the red stickmen will start attacking each other, and if you've done a better organization, you will be able to overtake the enemies and defeat them, gaining money for new soldiers to use in the next level, which presents a new map and a bigger challenge.

Now that you've understood all this, nothing should stop you from beginning the fun right away, after which we want to see you play more of our daily games, we always have surprises!