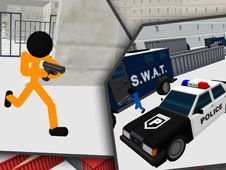 What is Stickman Prison Counter Assault?

Stickman Prison Counter Assault is here for free and unblocked to offer you one of the best combos between shooting games such as Counter-Strike, the always fun world of stickmen, who make action-heavy games more interesting and safe, and the setting of a prison, which can be one of the most exciting places to go around on a shooting spree. Let's see how to do all this and more!

It's time to do a Counter Assault on the Stickman Prison!

The game is playable both on PCs and mobile devices, using the WASD to move, and the mouse to aim and shoot, having special touchscreen control for phones and tablets.

You can belong to either the SWAT team or the PRISONERS team, both of them going out at one another in a battle royale that takes place on the prison map.

Shoot down members of the other team, eliminating them completely and surviving until the end to become the winner, while, of course, making sure not to get shot down and killed yourself instead.

In the given time for each battle, try getting in as many kills as possible. Good luck to all the players who will now try this game, and we hope to see you stick around for even more of them to come!