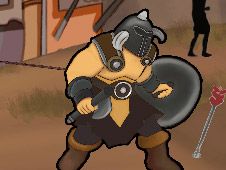 What is Medieval Battle 2P?

Medieval Battle 2P is one of the most interesting 2 player strategy and war games online that we've had on our website so far because when it comes to games like this one, they don't usually come with a two-player mode as well, as they usually only have the campaign mode. This one offers both, so if you think that you've had enough fun against the computer, invite a friend over and battle each other!

Let's take part in a medieval battle between two players!

If choosing the Campaign mode, you will be entering a simulated world from those times where you make decisions on your kingdom and its troops, giving your best to conquer as many new territories as possible, and keep winning war after war. Choose the best strategy of how to place your soldiers, what kinds of soldiers to use, and how to attack and defend at the same time.

If you defeat enemy troops on a territory, you take over it, and this allows you to increase your army's number of soldiers as well as their strength. If playing in the 2 Player mode, both players set up their strategy, and then the game starts simulating their war and the best plan will win, with the goal of both being the same: defeat the other player!

As for the controls, you use the mouse to interact, X to remove soldiers, CTRL to place soldiers properly, right-click for camera rotation, WASD for camera movement. With all this information we are sure you are able to give this game your best, both of you, so start the fun, and make sure to stick around for more of it, today will be amazing!