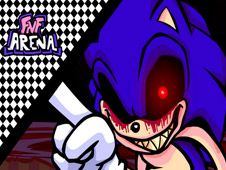 FNF Arena: V.S. Sonic.EXE Challenge is a new kind of rhythm game where you and BF have to face off against multiple characters from the cursed Sonic universe, the song being called 'Spirits of Hell', and the characters are Xenophanes, Soul Tails, Soul Knuckles, and Soul Eggman.

Let's defeat the Spirits of Hell from the Sonic.Exe FNF Arena!

Your role is still the same, which is reaching the end of the song by playing all of your notes according to the charts. To do that, press arrow keys at the same time as the identical arrow symbols match above BF. If you miss hitting the notes multiple times in a row, you lose and have to start again from scratch. We wish you all the best, and invite you to stick around for more awesome content we offer you here day after day!