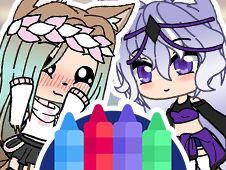 What is PG Coloring Gacha?

Gacha, one of the most popular Japanese games is now in front of you, and the Play-Games.com team has thought of offering you a simple game with these anime characters to get to know the most important characters in Gacha Club. As you can see, the first thing you need to do is choose the character you want to color, and here we have a lot of virtual dolls that you can color as you want.

Who are the most important characters in the Gacha World game?

In the following, you will need to know 8 different types of characters as follows:

Use the mouse to color these images with Gacha girls.