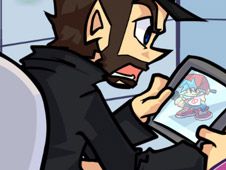 What is FNF vs Eminem Bowel Brawl?

Eminem is battling Boyfriend in rap while he is sitting on a toilet, using a tablet to communicate, but we have to show Marshall that this is not the right way to do it, so help the blue-haired protagonist win right now on two awesome songs:

Winning is achieved the same in both the story mode and free play mode, which is by reaching the end of the songs, which you do by playing your notes according to the charts. So, when you see arrow symbols float and match above BF's head, press the identical arrow keys. Don't miss doing it too much, or you lose. Good luck, enjoy!