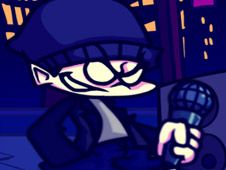 There is no faster rapper when it comes to rhythm and rhyming than Eminem, that's a fact, which is why we are tremendously excited that he is the latest modded character into the world of Friday Night Funking Games online, where right at this moment you get the opportunity of having fun with the mod called FNF Vs Eminem (W.I.P), where Eminem replaces Pico in Week 3 of the game.

Do you think you can out-rhythm the Rap God? Find out!

As we said, Week 3 is where you go to battle Eminem, and you can do it in either the story mode or the free play mode, with all the other characters remaining in their week, just as they were. Reach the end of all the songs and play and rap all the notes and verses of the songs to win.

How? Well, you will have arrow symbols that match above BF's head, and when they do, at the same time you press the exact same arrow on your keyboard to play that note. Don't press the wrong keys, and make sure not to screw up the timing of the notes, since too many of these misses in a row mean you lose. Good luck!