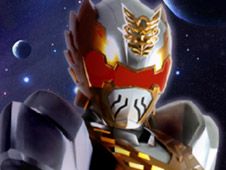 What is Robo Knight Flight Fight?

Robo Knight Flight Fight is one of the best new Power Rangers Megaforce Games on our website, which, judging by the other offerings we've had from this series recently, you like a lot, so we will not hesitate to bring it over for you just the best, as it is the case with this one right now, where you will take soaring to the skies to win your battles against evil!

Let's help the Robo Knight win the Flight Fight in one of the best Power Rangers Games here!

Move the mouse where you want the character to fly towards, and when enemies are near him or in front of him, he will start shooting automatically. If you can't shoot down the enemies, like the asteroids or enemy robots, make sure to avoid them, since bumping into them costs you lives, and losing all of them means losing the game as well.

The more enemies you shoot down and defeat, the bigger your score becomes. In your space flight, you can grab power-ups like the bomb, invincibility, or the laser upgrade. For the bomb, there is a special button you have to click, but you need to wait for it to recharge to use it again.

Fly, shoot, avoid and everything else that is needed to defeat the intergalactic evil forces, and once again save the day with the Power Rangers MEGAFORCE!