Friday Night Funkin’ at 5 AM 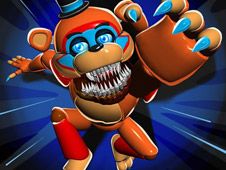 What is Playtime Horror Monster Ground?

Playtime Horror Monster Ground is going to be one of the most unique FNAF Games online to have been added to our website so far, not only because it is 3D, but because it gives its take on hide and seek games online, but with horror elements, such as these scary animatronics!

It's Playtime at the Horror Monster Ground!

You will play the role of one of the devil toys, such as Freddy, for example, and you move through the house and try to find the furniture pieces that the human stickmen have transformed themselves into to hide, having to catch and kill all of them to win the level, earning coins in return.

At one point, the police catch onto this and invade, starting to shoot at you, so give your best to avoid them, their gunshots, and maybe kill them instead, earning even more extra points. Each new stage is more difficult, but you also have the chance to earn more points, so do that and try to out-rank players from all over the world who are also playing.

Simply use the mouse to move around, and dash towards enemies to attack them. We wish you the very best in becoming a fuzzy monster toy, enacting horror, and have fun as only here is possible, inviting you to try out even more of our great games of the day after this one!