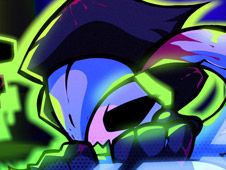 What is Friday Night Funkin vs Claymore?

Claymore is a new FNF character that Boyfriend discovered in a rundown lab, and you now have to defeat him in a rhythm battle on the song called 'Blood'!

When the floating arrow symbols match above BF's head, press the identical arrow keys at the same time to hit your notes, and if you keep doing it until the song's conclusion, you win, but know that missing to hit your notes too many times in a row will lead to your loss. Just try again, then, and you will eventually get better and win!