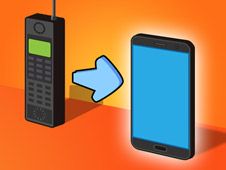 What is Phone Transform?

Phone Transform is a game that makes dreams reality, at least virtually, as we're talking about a game where you can take a cheap and maybe not that high-end mobile phone and transform it into one of the best there is out there, all you need for that is a skill, focus, and the ability to keep on going for as long as it is needed, following the rules of the courses presented to you!

Transform your Phone with skill!

Phones have been around for decades, but they have evolved really fast during this time. You will also try to do it very quick, as you begin with one of the earliest prototypes of mobile phones, and try to take it to the ones released maybe just one month ago.

Use the mouse to hold and drag the phone around the course, or the finger if playing on a phone, ironically, and go through the gates that add more days or even multiply the ones you have, so that you evolve into newer editions, but avoid those that take time out, that will regress your phone.

Try to advance through the decades as quickly as possible to get lots of money at the end of a level, where you have a bonus round that gives you rewards based on how far you've evolved and transformed. It's that simple, so let the fun begin, and don't hesitate to share the game with your friends as well!