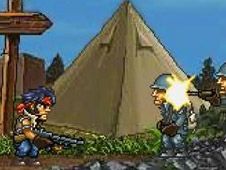 What is Commando Battle Of Britain?

Commando Battle Of Britain is one of the best Miniclip Games online in the genre of action games with shooting, otherwise known as side-scroller shooter games, with this one having pixelated animation and a retro vibe, which makes a lot of sense, since the game takes place in the times of WW2, where you need to defeat the Germans in battle, for the side of Britain!

Take Commando and win the Battle Of Britain!

It's quite simple: use WASD to move, use the mouse to aim and shoot the guns at all the German soldiers you encounter, and keep advancing through enemy lines until you have won the war while being careful not to get shot down yourself instead, which means you lose once the health bar depletes.

Now that you know how to take action, do it, have the best time possible, and invite friends along for all the fun as well, they might not even have known about this game!