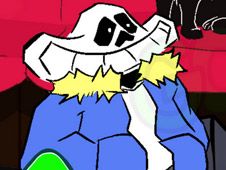 What is FNF Sanbs on Thursday?

FNF Sanbs on Thursday represents a brand new crossover with the world and characters from Undertale, even if they are meme versions of them, a skeleton dear to the fanbase who you now have to face off against and defeat on the following tracklist:

Let's defeat Sanbs in FNF, but on Thursday!

Whether you choose to play in the story mode or free play mode, to win you have to do the same thing, which is reach the end of the songs by playing their notes according to the charts.

How do you do it? Well, by pressing arrow keys at the same time as the identical arrow symbols match above BF, who sits on the right side of the screen.

Be careful not to miss your notes too many times in a row, which will lead to your eventual loss when the health bar depletes. Good luck, enjoy!