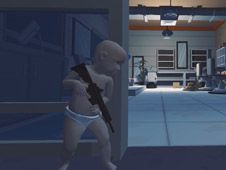 What is Gears of Babies?

Gears of Babies is a first-person shooter game online in 3D on our website unlike anything you've ever played here before, featuring a story where a baby is done with the government using their money for war instead of baby formula, so he is out to take them down with his own gun. Let's help him out!

You are thrown in the arena, starting off with a warehouse, where you have to shoot down all your targets and keep doing it until all the enemy soldiers have been brought down, but if you get shot and killed instead, your health bar is depleted, you are going to lose.

Use WASD to move, shift to run, the mouse to aim and shoot, and the R key to reload your weapon's ammunition. It's that simple and fun, so let's begin right now, and make sure to stick around for more fun to come, the day is far from being over!

Use the WASD keys, spacebar, shift key, and the mouse, R key.