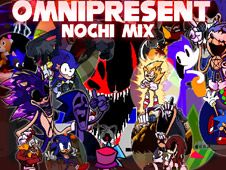 What is FNF Omnipresent Nochi Remix vs Sonic.exe?

The FNF Omnipresent Nochi Remix features a whole slate of Sonics, Exe included, as your various antagonists, with them coming after you one after another, and we're absolutely sure you will have a blast facing off against them!

Try the FNF Omnipresent Nochi Remix with Sonic.Exe and other hedgehogs!

When the floating arrow symbols match on the top right side of the screen, where Boyfriend sits, press the identical arrow keys to hit your notes, and do it until the song ends to win, while being careful not to miss your notes too many times in a row, because if your health bar depletes, you will have lost. Enjoy!