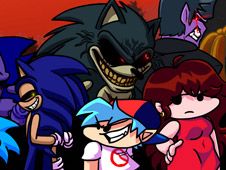 What is FNF EXE: Undying Phoenix?

FNF EXE Undying Phoenix is a mod that once again features the hedgehog in the EXE version, but in a new one, as the universe has been reset, and precisely for that reason you should not miss out on this experience for anything in the world, as we're talking about a full-fledged mod featuring three new tracks for you all:

From the main menu you need to choose between playing in the story mode or free play mode, and in either case, give your best towards reaching the end of the song, doing so by hitting notes according to the charts until then.

To do it, press the arrow keys at the same time as the identical arrow symbols match above BF while being careful not to miss too many notes in a row, which will lead to your loss instead. Good luck, enjoy!