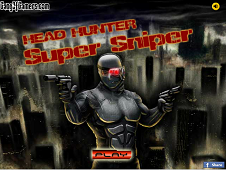 What is Head Hunter Super Sniper?

Head Hunter Super Sniper is maybe one of the greatest shooting games you've ever played due to fact that it is so realistic and it consists a lot of missions which can be realised almost only in the real life. You are gonna handle the most dangerous and skillful sniper in the world and his name and identity are unknown for the ordinary people. This guy was hired by somebody with a lot of money to be an assasin and you should kills some dangerous targets, business men, people with a lot of influence. After you are gonna kill them all, you have to let your mark on their dead bodies, and this mark consists of writing on their bodies with a knife HH, which means Head Hunter! This game is so rough and it tests you maximum some of your qualities and abilties like shooting accuracy, precision when it comes to shooting somebody and a lot of skills when it comes to handle a gun. Good luck and have a lot of fun while you are playing this incredible and awesome game, and be the best sniper killing all your targets from the received missions! Good luck once again!