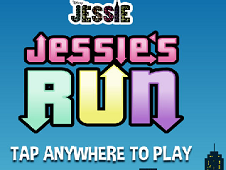 What is Jessie Run?

Jessie Run is a new game from the Jessie Games category, this category of games is lovely and amusing to play because it has the best characters from the Disney Channel TV show called Jessie. Because of that, this game is also a game from the Disney Channel Games, a category of games that we all know that only has the coolest and best games to play. In Jessie Run you must help Jessie to catch the kids who are running from her and to get back your belongings. On your path, you must avoid all the obstacles and to do that you must use your arrows. With your left and right arrow you will move Jessie in the left and right part. Using the up arrow you will jump over obstacles and with the down arrow you will slide under them, but be careful because there are some certain objects for which you have to use the up arrow and certain for which you have to use the down arrow and some you will need to avoid. There are also a few power-ups that you can use through the game. Try to collect as many shoes as you can and have fun!

use the arrow keys