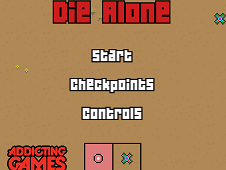 What is Die Alone ?

This is definitely one of the greatest shooting adventure, a special game which doesn't put any accent on graphics or but on the main action. The goal is to use the arrow keys in order to move with your special shooter character all around the game screen and then, use the mouse in order to shoot the bosses, that are some really huge things positioned in different spots on the game screen and they are also a main source so chaos and disaster. They are releasing permanently so many bullets and projectiles that are meant to kill by more touched so you must avoid them. The bosses spread all the projectiles all around them so make sure that you will calculate the right angle and avoid them successfully in the shortest time. This isn't going to be actually easy so pay close attention to the details, for making sure that you will not die alone trying to stop them! As the projectile gets farther from the boss, their main source, they will spread the distance between them, just like in a real blast, so you have to dodge the circle projectiles without hesitation and shoot their main source for killing it! Then upgrade weapons and anything else and become unstoppable!