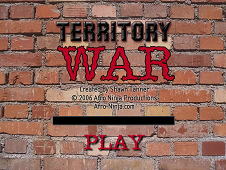 What is Stick Wars?

You can’t get to find and play 2 player war games online as immersive and interesting as Stick Wars, also known as Territory War, where not only do two players enter the battlefield, but instead of controlling just one avatar, both players have their own army, an army of stickmen, and they go against one another in turns, trying to defeat the soldiers of the rival team!

The two teams are going to be the red team and the blue team. Defeat all the members of the other team, and deplete their health bar completely, and you will have won the war. During your turn, you can pick one of two options: you can move, or you can stay. For the moving option, know that your movement is still going to be limited, so do it when necessary only!

After that, you will get the other options you can do, different attacks you can make. The three options are attacked with a grenade, with a gun, or with a boot. Grenades have quite a lot of damage and can hit far away, the gun is good for accuracy, but can only take out one target, while the boot does not do much damage, but can knock off someone and then you can finish them off.

The wars get more brutal as you advance, but you are surely going to become a better war chief too, and you will win one battle after another, to become the king of Stick Wars!

use the number keys