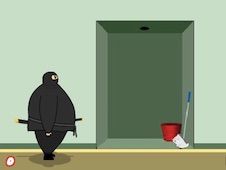 What is Fat Ninja?

Who says a Fat Ninja can't be just as good as a skinny ninja? Well, many people are saying that, but you are here to play the role of one in a brand new action-adventure fighting game with ninjas offered to you free of charge on our website, where despite being overweight, you and your avatar will give it your best to kick ass and defeat all the enemies, just like any shinobi would honor their mission by doing!

Get into the action with the Fat Ninja, and show those slim ninjas who's the boss!

To begin with, we recommend learning how to control the character, as you use the arrow keys for movement, Z to attack from behind, hide, or open yourself up, and the spacebar for the attack, a super attack, or regular fighting. Alternate these actions and attacks depending on the situation you are in.

A ninja's main ability is to infiltrate because stealth was the main attribute that separated them from their eternal rivals, the boastful samurai, and you are also going on a stealth mission in this game, as you are infiltrating a building filled with security guards all over the place.

This might be hard for a fat man, to not get seen, which is why your best course of action is to try and use the attacks from behind as much as possible, but if that is not feasible, you can always make sure that you knock your opponents down as fast as possible, without letting them too much room to get help or give your position away.

There's an alarm meter at the top of the screen, and if it gets fully complete, it means that you were spotted by guards and enemies too much, which raises the alarm, and you lose then and there because if a ninja gets seen, his mission has failed. Of course, you also have a health bar, so if that gets emptied out, you were hit too many times and can no longer move forward.

The more levels of the game you pass, and the more enemies you defeat through them, the bigger your score becomes, so try aiming for a big one, of course, as you should do with any games that have a point-based system.

Join Shuruyito on his path of ninja, right now!

Now, are you wondering why is this big ninja going through all this trouble? Well, evil lizards have stolen magical ingredients from his village to use for their evil deeds, and they have locked them inside this building and put so many guards to protect them, so the only way to retrieve them is to storm through your enemies while not letting the big bad guys get a whiff of that.

There are four worlds you will visit, in a total of 12 stages, one more fun than the other one, and no matter how many enemies and traps you encounter, strive ahead and become the world's greatest Fat Ninja!

Use the arrows, Z key, spacebar.