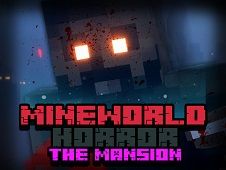 What is Mineworld Horror: The Mansion 2?

In this block styled zombie horror game, you must finish the levels and rescue the crew! Twelve hours ago 2 police officers and a medic were sent to the mansion located in the outskirts of the city. Later they called that something strange was going on, and after that, nobody heard from them anymore. You are sent to the mansion to investigate what happened and to potentially rescue the crew.

The mansion is infested with zombies and zombie animals, you must shoot them before they can hurt you. You enter the mansion knowing nothing, only that you need to look for the missing crew. Later on, you realize that the zombies you just shot, woke up again to get you. You will also find that some doors are locked, and you need to find the keys. Later on, you will find messages written by someone that help you understand the situation. Someone wanted to make a youth elixir but instead made a deadly zombie virus that allows the zombies to wake back up even after they were killed.

The locked doors need different types of keys, each of them colored in a different way. To get the keys you need to enter different parts of the mansion and get through a lot of zombies to search for the key. Once you've found a key, you can enter the new location to advance your search for the crew further.

Later one you find better weapons on the ground that need a different type of ammo. Ammo, medic bags, and keys can be found in the rooms of the mansion scattered around. You start out with a small pistol but later find the shotgun that needs shotgun shells to shoot.

Are you ready to find out the truth?