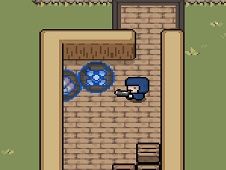 What is Helmet Royale.io?

Helmet royale is a brand new battle royale game on our website! This battle royale is unique because every player has a helmet on their head! This is an online game where you fight against other players using any weapon you find. Over time, the storm will slowly close further in, forcing the players to fight each other for survival.

When you start the game, you will spawn in the arena with 100 other players in a random location and you will be in helmet mode, in this mode, you can only explore the map but after some time you will come out of your helmet and the match starts! At first, you'll have nothing but your fist, with your fist you must break chests that are filled with items such as weapons, coins, shies batteries, and more. These items help you in numerous ways:
The weapons you can collect allow you to shoot your enemies, there are numerous types of weapons available in the game: There are four rarities in the game, common, rare, unique, and legendary. The higher the rarity, the better the weapon, shield, or chest will be. The higher the rarity of the chest, the more likely it will give you a rare item. Chests can be found all over the map and can be broken by shooting or by hitting it until it opens. You may also encounter rolls, rolls are rare machines that give you a random item in exchange for coins.

Time to be the last to survive!

WASD to move. Aim and shoot with your mouse. Dodge with shift or space. Change weapons with the numbers. Reload with R or left-click on an empty weapon. M, V, G to view map. To use medical items press on them or use the numbers 6, 7, 8, 9.