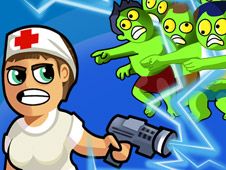 What is Zombie Royale.io?

One of the best things that you can do on our website, no matter the time or who you are, is to play some awesome multiplayer zombie shooting games, since that is not a format you get to find just any day, especially with a game of such a big quality and which provides so much fun as today's one does, a game called Zombie Royale.io!

Enter the zombie-torn world and survive it, shooting all the undead!

You are going to use either the W, A, S, D keys or the arrow keys to move around the 3d-rendered map, where you will encounter various groups of zombies, and be careful of them because as soon as they see you, they will start attacking. You also attack them automatically, with your guns firing when they are near you.

As you move through the map, not only should you defeat zombies, but you should also save humans and add them to your team, because the more people you have in your squad, the bigger your firepower gets. You can also pick up special abilities, ammo, and new weapons along the way, so use them to your advantage!

Winning levels and surviving give you coins, and you should use them to upgrade your soldiers and become better since there will be huge zombies and strong enemies attacking you at various times. Good luck, enjoy, and make sure to stick around and see what other new and fresh games we've got in store for you here today!