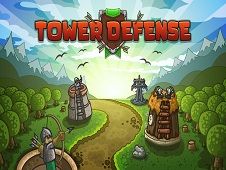 What is Tower Defense 2?

Tower Defense is a cool new tower defense game where you need to build towers to defend the road from the bad guys. The bad guys are constantly coming to your location and trying to go through the road.

There are 4 main towers that you can build:

Building towers costs money, you can earn money by killing an enemy with your towers. Starting a wave will also give you a small amount of money. After a wave, the game gives you some time before the wave automatically starting.

Time to defend your palace!

Use the mouse or touch.