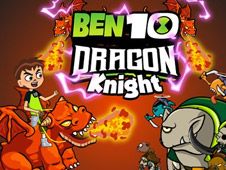 What is Ben 10 Dragon Knight?

After dinosaurs, it seems that now Ben 10 is ready to ride on a dragon, as he has been transported into a medieval fantasy world where dragons exist, but so do orcs, man-eating plants, and monsters, as well as all sorts of other enemies that he has to defeat, something that you will help our Cartoon Network hero with right now and here if you play the awesome game called Ben 10 Dragon Knight.

Help Ben 10 fly with a dragon and defeat his enemies!

As you fly through the enemies-ridden courses of each level, give it your best to avoid the flying, moving, or static enemies along the way, because if they touch you or their attacks land on you too many times, your health bar gets depleted, and you lose, something no one wants to happen, right?

Even better than avoiding monsters, try taking them out and gaining extra points, something that you can do by shooting fire or shurikens at them, as well as using special attacks or power-ups you might find along the way. You should also avoid seesaws, hammers, or other kinds of object traps that appear, and if you want extra points, collect diamonds and Omnitrix icons along the way.

Move using the arrow keys, use the spacebar to attack, and use the special on-screen mobile controls if you are playing on a phone or tablet. The fun starts now, only here, and if you want to have more of it, stick around and see what other new games of the day are still to come!