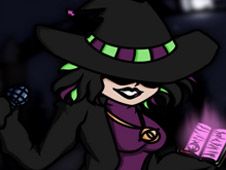 What is FNF Vs Mystic Myra?

The worlds of Friday Night Funkin rhythm games as well as that of magic and magical things have been intertwined since we've first started bringing these games over to our website, which is why we are very happy that you can now battle against a witch in the new and awesome game called FNF Vs Mystic Myra!

Who is Mystic Myra, the witch from FNF?

She is the antagonist that you will fight off in the Tales from the Raveyard mod of FNF, a sad witch who was wandering the graveyard trying to practice her spells when she encountered Boyfriend, so now they are getting in the groove! She is seen wearing a purple dress with a dark overcoat, has a witch's hat, of course, her eyes are covered, and she also has an eye necklace. The songs featured in this game are called: Cackle, Bones, Mystic, and Hocus Pocus.

How to play the FNF Vs Mystic Myra mod online:

You've got to reach the end of each of these four custom songs and hit all the notes of them along the way, which you do by tapping arrows on your keyboard when the arrows on the screen match one another. When you do that you make the bar green, but missing too many notes in a row will turn it red, and you lose, and you can't want that to happen, right?