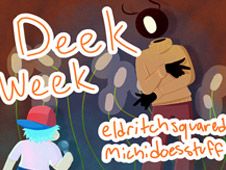 Only on our website can you be taken by surprise by new Friday Night Funkin mods online for browsers you can't find anywhere else, just like we are going to show you once more again today when you get the chance right now to have the most fun possible with the game called Friday Night Funkin Deek Week!

Who is Deek from FNF?

Deek is a man, but, rather, a creature, as he has the body of a man, but he is made out of shadows, with even his head being just a round ball of darkness, which has tails, and a white doodle in the middle. Other than that, he wears red pants and a brown turtleneck sweater. He loves music, so he is a fitting enemy for Boyfriend, and you face off against him in the Week 6 that this mod replaces.

When arrow symbols above BF match one another, press the same arrows on your keyboard to hit and play the notes of the songs at the right moment, but you should be careful not to miss playing too many notes in a row, because if that happens, you lose and have to start all over again.

Good luck to you, and we really hope that this will be far from the final FNF game you play today on our website!