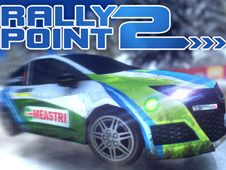 What is Rally Point 2?

It is a known fact that racing games with cars are some of the most beloved games on the internet, which is the reason why right at this moment our administrative team wants to invite you all to have lots of fun playing Rally Point 2, especially since the first game in the series has already been added not too long ago, and since it has been received very well, why would the same not be true right now for its sequel?

Give your best to be the fastest Rally Point driver!

Instead of racing off against other players, this game works more on the challenge system, where you have to get really good times in order to win the game. As you drive through the tracks, be fast, make drifts, and use nitro boosts if possible, trying to beat each course to unlock new ones, as well as get newer and better cars to drive and race with.

Move using the W, A, S, D keys, press space for nitro, L-shift to drift, and R to reset in case you crash or get stuck. Be careful not to overheat your engine, since that won't be good at all! Good luck and a really fun time we wish for you all, inviting you to play even more great games when you are done with this one, only here!