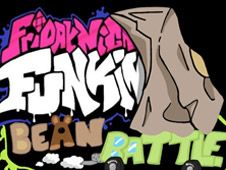 What is Friday Night Funkin vs Mr. Beans?

Mr. Bean is without a doubt one of the most popular and funniest characters to have ever appeared on television, both in his live-action show and the animated one, so it was only a matter of time before he was to be featured in our category of FNF Games online, where we are very happy that right now you can play for free the FNF Bean Battle mod!

Defeat this famous TV personality on three custom songs that represent him:

Are you better at music than Mr. Bean? Let's find out!

You are going to choose between the story mode and free play mode for starters, after which, in either of them, give your best to play the notes of the songs so well that you reach their end and the progress bar turns in your favor since that is how you become the winner.

To play notes, watch for when arrow symbols above BF match with one another above his head, and when they do, press the same arrow key too. If you miss doing that once, it's not a problem, but if you do it too many times in a row, you lose and have to start all over again.

Good luck to you all, and we hope to see more of you since fun is always around the corner on our website!