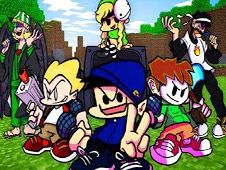 A new day means a new opportunity of playing awesome Friday Night Funkin Games online of the highest quality, with our team being very happy that right at this moment we get to share with you an awesome game such as Friday Night Funkin MCYT ModPack, which features multiple antagonists for you to defeat, so trust us when we say that you are in for lots of fun!

While the original songs from the six custom weeks remain available in this game, each of the original characters in those weeks has been replaced with a bunch of wacky characters, all with unique designs and fun animations in their spirtes. If you don't know how to play a rhythm game like this one, worry not, since we explain right now!

The characters are actually animated versions of some YouTubers you probably know, such as Dream, Quackity, Ph1LzA, TommyInnit, and Sapnap.

Arrows are going to float above Boyfriend, and when they match, you have to press the same arrow at that same time, not one moment sooner or later, because that counts as a miss, and it's also a miss if you press the wrong key. Too many misses in a row mean losing the game.

Instead, hit all the notes at the right time, and do your best to take all the songs to the end, make the progress bar green, and win! Good luck, enjoy, and we hope to see you around, playing even more new games as only we get to offer you!