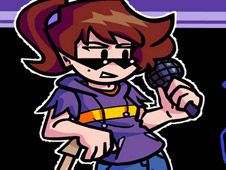 What is Friday Night Funkin’ VS. Abigail?

Abigail might look like a human, but she is actually an alien that has crash-landed on Earth, and she is not very pleased about it, even more, so that Boyfriend found her, and now she has to rap battle him, something that we hope you will help our protagonist with winning at since that is the most fun you could be having right now! Do it right now in this mod, on the following songs:

Boyfriend Vs Abigail, human vs alien!

Well, as it is customary to these rhythm games when you see that it is your turn, arrow symbols above BF's head will match with one another, and at that moment you also need to press the same arrow keys, something that you have to keep on doing until the end of the song to win.

Be careful not to miss doing that too many times in a row, or you lose. Choose between the story mode and free play mode, and then give this game your best from the get-go!